“We need to build more bridges and less fences”.

This was an observation by one of the hundreds of children who had turned up for the storytelling session at the Kenya National Library Services (KNLS), Nakuru Branch. Storytellers Roger Jenkins (Singapore) and John Titi (Kenya) had just shared a story in tandem. The tale was about two brothers, who had once been close friends but fell out over an argument about a cow. One brother then engages a carpenter to build a fence between the two homesteads, explaining that it was what he WANTED. The carpenter responds that indeed, he would build this brother exactly what he NEEDED, and proceeds to build a bridge between the homesteads instead of a fence as instructed. 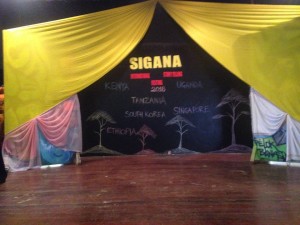 And that is exactly what the Sigana International Storytelling Festival is all about – building bridges between the different cultures of the world, and between the various storytelling styles practiced by different storytellers. Started in 2009, this annual festival took a hiatus last year, making a comeback this June (2016). The festival is organized by Zamaleo ACT, a storytelling group that could arguably be termed as the fathers (mothers?) of contemporary storytelling in Kenya. Over the last 6 years, the festival has attracted storytellers from Sweden, Denmark, Canada, Romania, USA, Uganda, Tanzania and Ethiopia.

This year, Kenyan storytellers and their counterparts from the larger eastern Africa region – Andrew Ssebbagala from Uganda, Christa Komba & Shabani Jabari from Tanzania & Ethiopia’s Zerihun Berihanu – were joined by Roger Jenkins from Singapore and Seung Ah Kim from South Korea. It was 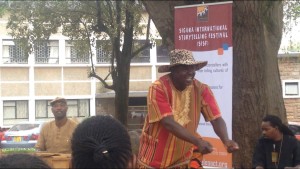 indeed a feast for story lovers. Kenya was well represented by Maimouna Jallow, John Titi, Saul Muthoka, Onyango Owino, Agnes Kabeu and myself. The Zamaleo team had also incorporated students from University of Nairobi’s Department of Theatre & Performing Arts who were quite instrumental with their engaging dances, stories and poetry performances. Veteran storyteller Alumbe Hellen doubled up as performer & Festival Director of the 2016 edition.

Held at the Kenya Cultural Centre (this is the complex that houses the Kenya National Theatre), Kenyan audiences were treated to a sumptuous buffet of a story-meal. Roger Jenkins was an absolute favourite. He mixed his humorous telling with snippets of American Sign Language which he taught to the audience, who joined in the performances. Maimouna endeared herself to the audience telling Shela, a story about slavery. Christa was on point with her bongo flavoured Swahili taking the audience along with her on her telling journey while Andrew earned himself a number of nicknames ranging from Njabala to Bemba Msota from the characters in his stories.

Being part of the organizing team since its birth, this years’ festival was a different experience for me. On previous editions, I have always been shuttling back and forth, from the stage to administrative work, to sorting logistics and back to the stage. As such, I h 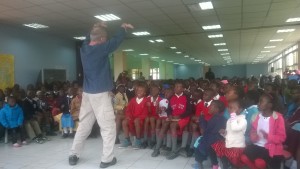 ardly ever watched other storytellers’ performances. This year, I cut down on the number of performances and opted to do more of the behind the scenes tasks which was quite rewarding (my friends who asked me why you did not see me on stage much, this is why). So did Alumbe, who could be seen with stars in her eyes as she watched the various Kenyan performers, most of who have passed through her hands deliver quality performances one after the other.

On a different tangent from other editions, this years’ festival incorporated various workshops for the larger audience. Previously, we only had workshops specifically with participating storytellers. Roger led a workshop for teachers on the effective use of stories in the classroom. Man, this guy is good! So awesome was the workshop that a group of teachers requested that he visits their school for a session with their colleagues who had remained behind. You can check out his review of the festival here

Seung Ah Kim took the storytellers on a journey about Korean culture in the 21st century as well as the MBA’s of storytelling – Marketing, Branding and Advertising.  She is not only a great ambassador of her culture but an amazing storyteller, infusing doses of the Korean language in her stories. By the end of her performances, the audience could be heard calling out Kamsa mida (Thank You) and Anyeong haseo (Hello). We had some fun saying that the Koreans must be descendants of the Kamba people – what will all the seos in their language! She also brought with her Korean Lucky bags which she shared with all the audiences. I hope that they will put all the stories that were shared with them, then take out one at a time and share them with others. For that is the Sigana objective, to light a small fire in the hearts of its partakers that in turn lights many other story – fires which will make this genre a huge blazing ball.

The tellers shared tips on how storytelling as a career works for them in their respective countries. Will definitely be trying out some of the suggestions. 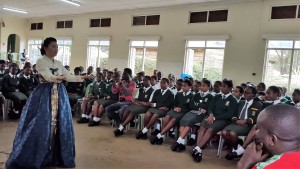 Ethiopia’s Zerihun took participants through a workshop on experimental theatre, creating theatrical performances with body images. This I enjoyed very much.

Also a first time for the festival, in addition to the family audiences, we had groups of primary school children from various schools around Nairobi participating. This is an extension of the school performances that Zamaleo is quite famous for, usually as part of the Oral Literature program for high schools. Of course, the festival could not come to an end without a performance at Alliance girls High School, Kikuyu. The school has hosted an Oral Literature day annually for the last 10 years, with the Zamaleo team being the main facilitators. They have hosted the festival at the school each year since its inception. 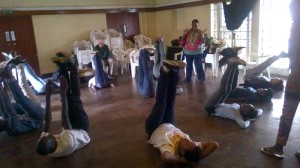 The final performance that brought the #SiganaFest2016 curtains down took place in the ultra-modern Nakuru Library. See this article on the event from a local newspaper. Hundreds of school children made their way to the venue, where they enjoyed an interactive storytelling session from the Zamaleo team and Roger Jenkins. Kudos Purity Kavuri, you and your team are a major cog in the wheel of a wholesome education for Kenya’s children. Your library is so full of life! You can read coveragae from the Daily Nation newspaper about this event. 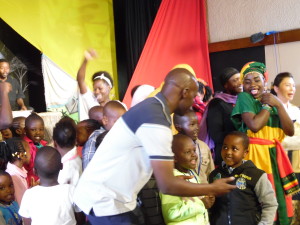 And danced some more…

By the way, have you visited any of the Knls branches lately? There seems to be a revolution. The libraries of yore, from personal experience were dusty, cramped places where only the most desperate ever seemed to visit. In the words of Jackie Karuti, libraries were where books went “to die”. Buruburu and Nakuru branches are an epitome of modernity, what with wifi and e-learning centres and spacious, airy spaces to read from. These two branches also have large multipurpose spaces that can be used for various literacy, cultural and edutainment activities. In these two active institutions, books are definitely coming alive. Give them a visit and let me know what you think. On my part, I have put it on my bucket list to visit several more Knls branches this year and see whether they reflect the same.

The audiences who patroned the performances at the Kenya Cultural Centre were amazing. They sang, shared in the storytelling and danced away even when some sessions like the Saturday 3pm one overflowed their time limit. This year, more than half of our audiences were new, sharing the Sigana experience for the first time. From their feedback, I am sure they will be coming back. A good number of people requested that we should be having these sessions more regularly, not just twice a year. 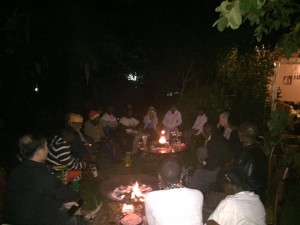 From a consumer point of view, I say definitely, yes! Truth is, it needs quite some resources, both financial and human to put up these events.

I guess this is a call for all storytellers to stand up and create storytelling events in different venues as there is definitely a market for it.

It was not all work and no fun though. Some of the storytellers got a chance to sample Kenyan delights, both within and out of the city. Roger Jenkins took a 3 day tour to the Maasai Mara for a game drive before we whisked him to Nakuru for the performance at the library. Seung Ah,who was leaving much earlier, managed to sneak in a visit to the Animal Orphanage and The Giraffe Centre.

She kissed a giraffe! She could not make it to the David Sheldrick Elephant Sanctuary though – we missed the visiting hours. Definitely a plan for next time. The delightful Maimouna also hosted the storytellers and storytelling friends to a beautiful dinner and chat at her house. 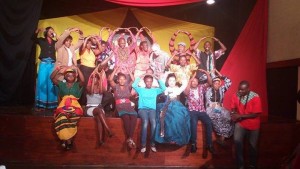 This reminds me the story of a man who said, that whenever you see a turtle on top of a tree, know that it definitely had help getting up there. The festival indeed appreciates the support of art lovers such as Mr.  & Mrs. Ngovi Kitau, All For Cars Limited, Bungu Visuals, Cinematic Solutions, The Kenya Cultural Centre, LtCaezar Communications, and The Kenya National Library Services (KNLS) under the stewardship of Dr. Richard Atuti. However, it is hard running the festival on a shoestring budget. Hopefully, we shall have more supporters coming on board for the next edition.