As a performance scholar, I understand “performance” to be a way of making meaning, a path of exploration into knowing. My kind of performance is characterised by three things: it emphasises the potential of the creative and artistic in intellectual work; it focuses on embodied performance, heavily been influenced by my experience and training in theatre and storytelling; and it is rooted in, even though it is not confined to, indigenous traditions of African performance. 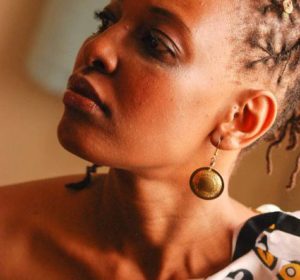 Would you say that is an area that is open to young people? Where can they train (in Kenya)?

Yes, it is. Training should begin at home from the earliest ages through exposure and engagement with art as a way of making meaning of the world. Indigenous traditions of education took the arts seriously, not just as entertainment, but as a pathway to nurturing a baby into an educated human being. Once that foundation is set, that education can continue in school.

What we need to work more on is thinking of arts in school as not just imparting skills and cultivating talent, rather, as giving every student in every school a way of engaging with knowledge through the aesthetic and creative potential inherent in each one of us. This is why it is critical that we invest seriously in the arts throughout the school curricula, understanding that the arts are not just for a talented few, but an essential part of a holistic education.

Unfortunately at present, I am not aware of any local university offering Performance Studies, but that basic foundation will serve one well moving into it at graduate level. At least this was my experience.

Why do you think stories matter?

Stories are a prism through which we are able to abstract, reflect, and collectively think through the entire range of realities that make up our world. They put flesh onto the skeleton of theory and enable us to go deeper into understanding our world, looking beyond the frame of abstract ideas to the “so what?” and “therefore” that makes us care. 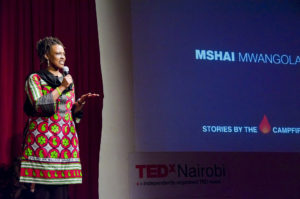 Mshai during a TEDx session here in Nairobi

When did you realise that you were a performer?

I’ve been performing for as far back as I can remember. As a child, there is nothing I loved better than to craft and re-tell the stories I was reading – I was such a bookworm! – to whoever would listen, my siblings and friends. And when there was no one to listen, I

was my first and most demanding audience, mercilessly critical of each new rehearsal until the performance was as perfect as I could get it. So for me, definitely performance as experience, later performance as skill came before performance as something to study and teach. But that was all interlinked. I began studying performance because I got so much out of it, I wanted to understand it better.

Do you think that performance is understood as it should in Kenya?

No. The very fact that the Cabinet Secretary entrusted with education is even contemplating funding arts less than the sciences in tertiary institutions speaks for itself. That translates into penalties for students who choose this option; a sad indictment on how far we have to grow. Remember Kenya was recognised and respected as a leader in getting the world to understand the potential of orality as performance in the first couple of decades after independence. People the world over are still studying what we did in those first years when we introduced Orature into all levels of our curricula.

Why do you think that performing stories is important?

There’s a range of reasons performing stories is important. For me, performing a story that illuminates or reflects on an idea is my epistemology of choice when it comes to intellectually engaging with any idea. And having emerged with a narrative, it is a double gift to be able to use it to provoke what Ayi Kwei Armah has referred to as cerebration – collective thinking on an issue of commonality. 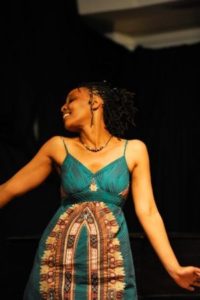 Mshai in a performance moment

In the process of identifying your passion and career, what mistakes did you make?

I was very tentative when I was younger in venturing off the well-beaten path in terms of career. It’s taken me time to learn to trust my instincts and go for new experiences, even when no one else is. I wish I was as comfortable three decades ago as I am now in just making my own way through life, not worrying if it makes sense to everyone else.

What’s the most integral thing that one needs to work in your field?

Faith in oneself. One will make mistakes, sure. And there’ll be some moments of questioning, but it is important to be willing to travel the path, even when it goes a circuitous route. Believing I am where I was created to be, doing what I was born to do; that is what keeps me going.