Prague is simply stunning. The capital of Czech, it is a city beautified by amazing medieval architecture, numerous nature parks, theatre spaces and a cultural diversity. The country itself is only 10 million people strong.  Like a clock that clock reverses back in time, the city gives a kind of perfect relaxation and artistic inspiration in the backdrop of exploration and photography. It is a city that was built to be romanticised.

Prague’s eccentric sculptures, buildings, bridges and streets tell an emotional story.  I savoured this romance for a few days, and picked 11 places I loved most.

Ready? Slide into a pair of comfy shoes, grab a trdl and enjoy the trail.

In 2002, there was massive flooding in the city. The waters of the Vltava river rose as high as two storeys in buildings all over the city. Never mind that barely a year before, it had been proposed that the riverbeds be reinforced incase of such a situation but scientists had brushed off the notion. In typical Czech humour, the residents joked that at least, the Germans could see how generous the people of Prague were. Had they not shipped entire houses, cars and other priceless things down the river into Germany? 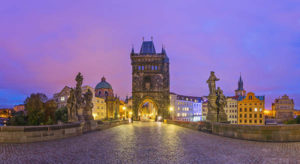 Many people volunteered to help clean the city after the waters had subsided. And that’s how my friend Lucie and her husband met! The bridge gives a spectacular view of the waters and the city, especially at night. Oh, and if you make a wish on the 8th statue on the right hand if you are heading from Old Town Square towards the Prague Castle, it is said to come into reality! 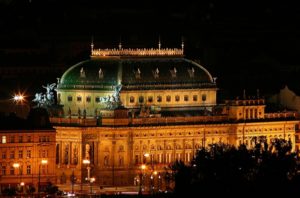 After years of colonization by the Germans, Czech people wanted a place they could showcase and enjoy their own culture. So, in 1851, they started to fundraise from the common mwananchi for both cash and in-kind support to build their very own national theatre. It was not easy work considering that most of the population was poor. But, haba na haba, they raised enough to construct a beautiful, monumental space. In 1881, the night before it was to be officially opened (it had been opened briefly before for a number of shows before completion), a fire broke out and the space burnt down. A huge disappointment. But the people did not give up. As they were watched fire vanquish the product of their sweat, they began contributing once more and within 47 days they had collected enough to redo the project. The current national theatre, mark this, is adorned with a layer of real gold crowning the top floor.

Found on one of the Vtlava river’s channels, this big wooden turbine turns over and over.  The waters are quite low, barely touching the turbine, and the speed of the waters as they snake down is slower than Opuk the tortoise. 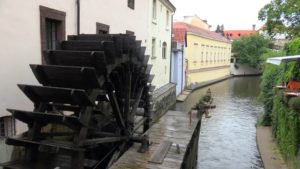 Yet, despite this, round and round the turbine goes, over the years it circles leaving people amazed. Next to the turbine is the statue of the devil J who apparently makes this magic happen. 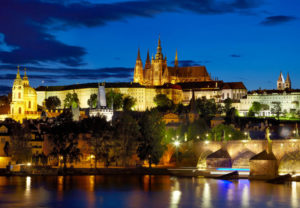 It dates to the 9th century and is said to be the largest medieval castle in the world. There are newer buildings built over time, and it is still the seat of the presidency in the Czech Rep. It is open to the public and attracts massive crowds every day. You will love the beautiful architectural designs and the spaces that have withstood revolutions over the years. From the castle built on top of a hill, you can see a big section of Prague sprawled below. A miniature Eiffel Tower rises from the other side and creates a sight to be behold at dusk. The castle is a vantage point for photography.

As we walk down this tourist path lined with small houses, I notice a doorway where a pair of bright red underwear hangs. No, they are not inviting you to some nudist party or something, my guides explain. The panties generally signify those lazy men who in the evening, would strip down to their underwear, put their legs on the table and drink themselves silly as the wife broke her back making things work. 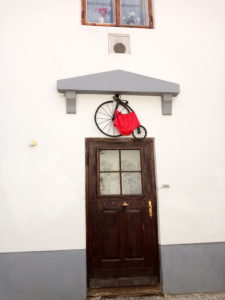 Red Underwear above a doorway

So, you can imagine the kind of character it is associated with. A few years back, some creative activists went into the castle. You see that place the flag is hoisted? They sneaked in, dressed as chimney cleaners, brought down the flag and hoisted a pair of enormous, bright red underpants in its stead. Imagine it blowing with the wind, the courtyard full of people clicking their cameras away. And it was not even brought down on the same day imagine!

If doing this trail during the day, you might want to pop into one of the cafes and restaurants around Wenceslas Square and grab some Czech cuisine. Sample some dumplings or mashed potatoes. The two meals are served with either baked chicken or deer stew. If night running is your thing, grab a burger with fried cheese filling and I promise it will charm your taste buds. I am not big on cheese but this, I loved. Then pick a bottle of Kofolo and keep walking.

This street is so tiny you can only go up and down in a single file, and only going to one direction at a time. Yes, it even has its own traffic lights for managing humans! 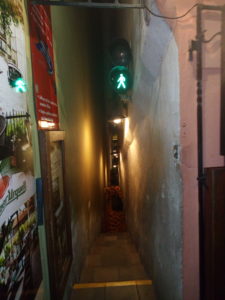 A person navigating through the street

The lights, on either side of the street signify whether it is in use or free. You push a button from your end to turn the lights before you take the flight of stairs to avoid collision with other pedestrians. 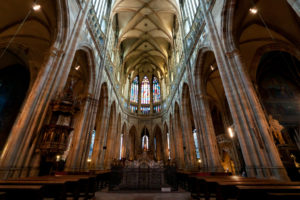 Despite roughly 80% of the Czech population not professing to any religion, Prague has a high number of attractive churches. Centuries old, they were built to last and to be admired, with lots of carvings and artistic works displayed within and without. Most of them still offer mass but are mostly frequented by tourists who admire the aesthetics.

8. The statue of Tomas Masaryk 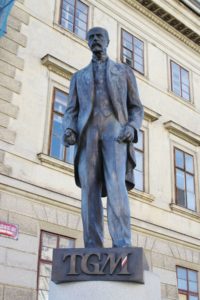 This statue is right outside the castle gates. A poet, writer and artist in his own right, this guy (the founding father of Czechoslovakia) is remembered by many for his words. In one instance, he gave the formulae for being happy. “Do not steal. Do not lie. Do not be afraid.” This advice would work very well in the current situation in our country, the first two parts aimed for our executive, and the last for the Kenyan population. 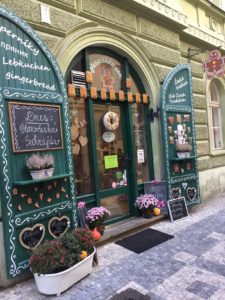 Based on a folktale with the same name, this bakery moulds its products into beautiful pieces of art. From cakes, biscuits, bread and cookies, they are all decorated in ways that make you feel guilty of eating them. Fancy a Valentine’s Day gift for your significant other with a sweet tooth? How would a pair of bikini cookies sound?

For a country that does not rank politicians very highly, this is one of the exceptions. He was the last president of Czechoslovakia and the first president of the Czech Republic after the break up with Slovakia. My friends show me, with pride, the balcony from which Vaclav made his first speech after his release from prison. He is one of the few politicians that Czech people seem to have respect and genuine love for. Oh, he was a poet and writer as well so maybe that makes for a good combination? 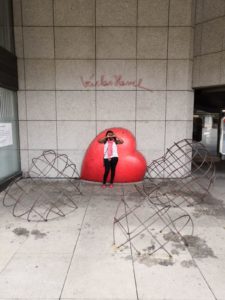 It is said that after his death, a local artist took all the candle wax from those lit outside his gate and created a big heart statue. There are three heart statues not so far from the national theatre in commemoration of him, with his signature pasted on the wall.

Legend has it that behind Blanik Mountains lies a powerful former king with an army of Czech Warriors.  “If you ever find yourself in a warring situation, my warriors and I will rise from the dead and help you win the war,” he is said to have promised before he took a bow.  Well, that situation will have to be much bigger than World War 2 it seems, for he slept, mum, throughout that period!

* A trdl is a kind of hollow, baked bun filled with cream. Very tasty and energizing.

* This list is barely exhaustive – merely a scratch of the surface.  There are a lot of museums and theatre houses to patronize, boat cruises up and down the river, spontaneous street theatre, the ‘Eiffel tower’ placed on the highest point of the city, the lanes of padlocks of lovers and so much more.

(Many thanks to Tomas, Dana, Lucie and André for not only sharing their city with me, but the love and passion they clearly have for Prague.)