I have had four sessions so far, one performance and three workshops.

The Swahili spoken in Tanzania, and which is what the students are being taught, is quite different from our regular Kenyan Swahili tongue. Although I am a pretty decent Swahili speaker, this will kept me on my feet.  Kuja? No, Njoo!

The performance tonight was very exciting. Sitting around a makeshift fireplace in the compound of the house Mwalimu Nyerere spend most of his life, the half-light half – dark environment was bewitching. We had some mbuzi choma amid small talk. Then Maembe Vitali, a Tanzanian musician took the stage. Strumming his guitar, he took us on a Tanzanian musical voyage from the mainland to Zanzibar and back. He also sang a number of songs from his own composition. I especially loved the Swahili misemo that were infused in the songs.

I performed two stories. I first told the myth of Gikuyu and Mumbi. This was followed by Muthoni Muchemi’s Kokoriko, Nani Ameniamsha? This story is always a good ice breaker and the students could easily identify all the different animals running after in other in Swahili. Since the students are still in their early Swahili lessons, I decided to do the first one in English and the second in Swenglish – half Swahili and half English.

Your sessions really brought me out of my shell. I also witnessed my friends’ confidence and their Swahili increase more and more across the sessions. I felt this in myself too – Damon, Swahili Summer School Student, The University of Edinburgh 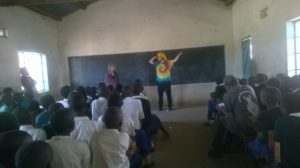 We had our first storytelling workshop. I opened the session by teaching them to call out a story:

They had learnt the first part from storyteller Mara Menzies who had a session with them before they left the UK. We then played one of my childhood games, a game that most Kenyans are very conversant with.

Then you go ahead calling the names of different animals. The idea is that you should only jump when the animals you eat are called out. If the ones that are not edible are named, you say, si nyama!

Sitting in the shed where Mwalimu Nyerere is said to have loved to bask playing his bao game, I shared a story, Nyama ya Ulimi, with them. The story is about a rich man who is disturbed why his neighbors, poor as they were, always seemed happy whereas his family was not. His own wife was always grumpy and sad yet he was rich and afforded her every luxury. The poor man informs him that he always gave the wife Nyama ya Ulimi (tongue meat). This leads the rich man to try all manners of tongue based concoctions to see whether it would make the wife tick. Later, we had an interesting debate, punctuated by guffaws when Mwalimu Tom brought up a question of what the Nyama ya Ulimi could be euphemism for.

On opening the floor for the students to share stories that they knew, I was surprised that they easily and happily retold not one or two but four different stories, some of them spicing the telling with doses of Swahili here and there. I was impressed. We were off to a much better start that I had imagined.

You are very good at creating Safe Spaces and pushing your students at the same time. I enjoyed the storytelling sessions very much! – Drude, Swahili Summer School student, University of Copenhagen

The students had their first taste of the storytelling stage today. Impressed by yesterday’s session, I upped the ante and divided them into five groups. Each group was assigned one story (from yesterday’s repertoire) that they had to creatively retell. I was even more surprised that a good number of the groups told quite of their bits in Swahili, not perfect but understandable, especially those who had a group member taking intermediate Swahili. In fact, one group did their entire story in Swahili. The other (Main) Swahili tutors, Mwalimu Yahaya, Mwalimu Janeth and Mwalimu Twaha did a brilliant job helping the groups in the translations.

I think I will up the bar. Instead of targeting one story in Swahili for their performance next week, I will push them to do three.

We also learnt the different techniques that can be used to get the audience to participate. We tried out vitendawili and vitanza ndimi. It was hilarious posing Swahili riddles to the students. For example, the riddle, Fatuma mchafu brought about a lot of head scratching. Think local, the teachers insisted. It was quite fun as we posed the riddles and the tongue twisters.

The students are quite tired. Most of them stayed out late last night at the local disco-vumbi dancing the night away so as to bid farewell to Laura. Hailing from the US, Laura will be leaving tomorrow, headed to Australia to join university there. They will also be having their weekly progress tomorrow.

We decide to reduce the session to an hour. The groups showcase their pieces, most of which I am glad to see that are in advanced stages of translation into Swahili. Later, we discuss what participatory techniques each story will use. This will be their assignment for the weekend – to research the technique and infuse it in strategic points in their stories.

The jitihada ya kibinafsi displayed by the students is amazing I must say.

The objectives of the workshops are three- fold: to introduce them to the awesome art of storytelling, to prepare them to do a performance to a local primary school next week, and to reinforce the Swahili language skills that they are learning in their other lessons. I have added another MUST ACCOMPLISH objective – to have fun!

I was pleasantly surprised though, when peeping in some of their tutorials during the week. Every once in a while, they would break into some techniques we learnt in the story sessions. Mostly hadithi hadithi and nyama nyama but sometimes, it would also show in their sentence structure. At one session, a simple sentence creation leads to a whole story-paragraph and the students end up debating how best to wrap up the story. Mwalimu Janeth is super safi – very cool!